PM fiber is manufactured with stress members that cause considerable birefringence such that the fiber acts as a continuous wave plate. It is usually used for the transmission of plane polarized light along one axis (generally the slow axis). As the propagation constants of the axes are very different, the fiber behaves like a multiple wave plate. Plane polarized light when launched at an angle to the axes changes from plane, to elliptical, to circular, to elliptical, to plane polarization, periodically through beat lengths. Plane polarized light launched on one of the axes is maintained on that axis, unless some perturbation of the orientation of the axes takes place. Any mechanism that perturbs and couples light from the slow axis to the fast (and vice versa) is defined as cross coupling.
The simulation model program PMFiber V 2.0 shows the evolution of a plane polarized input as it travels along a PM fiber that has the axes perturbed due to twisting or externally induced stress.

This model is especially pertinent to connectors, where a few millimeters of PM fiber are cemented into a ferrule and end polished. Shrinking of the cement and the different expansion coefficients of the materials contribute to external stress induced changes in the rotational orientation of the axes. The angle tolerance on the input orientation of the plane polarized input further contributes to cross coupling as does the tolerance on connector to connector axis alignment within an adapter, or a fusion splice.

There are many texts and references that describe the orthogonal polarized modes (the eigenmodes) that propagate in a singlemode fiber. This section reviews some definitions and compares singlemode and PM fiber.

This is due to the difference in coupling or loss between polarization modes as they propagate through a component such as a singlemode coupler. The difference may be dependent on the orientation of the component.

A pulse traveling along a fiber is subject to splitting, accumulating components of different phases and recombining to give elliptically polarized light developing a pulse spread due to the accumulated phase changes and axis rotations.

The simulation program PMdisp V 1.0 models the spread of a pulse as it travels down a singlemode fiber. 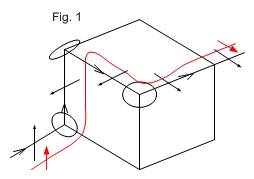